The Guardian, Tuesday 15 October 2013 16.00 EDT
“[Tanya Gold] is quite wrong to say all Jews agree on circumcision. Many secular Jews take pride in where we come from, but also have the confidence to explore an identity appropriate to the world we inhabit.” ~ Jew circumcised at birth in 1958 as part of a ritual. 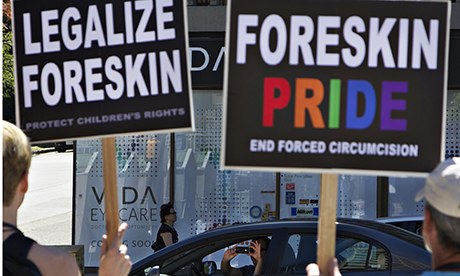 Protesters against male circumcision in Vancouver on 4 August 2012. A campaigning group, the Canadian Foreskin Awareness Project (CAN-FAP), has been lobbying for a ban on all circumcision for young males. Photograph: Andy Clark/Reuters

Tanya Gold articulates well the existence of contemporary antisemitism (A ban on male circumcision would be antisemitic. How could it not be?, 12 October). But I think she’s wrong in describing the Council of Europe as antisemitic for including ritual male circumcision in its examples of violations of children‘s rights.

I write as a male Jew circumcised at birth in 1958 as part of ritual. I would rather not have been. Yes, male circumcision isn’t as extreme a practice as female genital mutilation. However, I know from personal experience that it results in such problems as desensitised sexual feeling, frequent soreness and occasional bleeding. I believe that this irreversible action is at heart an assault on a child, incapable of giving meaningful consent. I attach no blame to my parents’ generation, who would have made the decision in the aftermath of the Holocaust, and who would have experienced a society more overtly hostile to them. But I find it depressing that contemporary Jews wish to continue the practice.

And she is quite wrong to say all Jews agree on circumcision. Many secular Jews take pride in where we come from, but also have the confidence to explore an identity appropriate to the world we inhabit. For me, that’s an identity that says yes to traditional Jewish elements such as emotional openness, warmth and respect for older people; and no to, for example, physical mutilation, homophobia and misogyny.

The Council used language that was reasonable and balanced, and I would support a legal prohibition to ritual circumcision. If such a move is expressed in language or images that are antisemitic, then we fight them on those grounds. But that’s not the case here.
Mike Morten
Worthing, West Sussex