Male infant circumcision is a surgery that forcibly retracts and removes the prepuce (foreskin) of the penis. This is done by using specialized circumcision clamps, hemostats (sharp tipped needle nose pliers with locking clamps), blunt probes and sometimes plastic rings.

A first hand account of a circumcision seen for the first time as a nursing student.

“We students filed into the newborn nursery to find a baby strapped spread-eagle to a plastic board on a countertop across the room. He was struggling against his restraints – tugging, whimpering, and then crying helplessly. No one was tending the infant, but when I asked my instructor if I could comfort him, she said, “Wait till the doctor gets here.”…When he did arrive, I immediately asked the doctor if I could help the baby. He told me to put my finger in the baby’s mouth; I did, and the baby sucked. I stroked his little head and spoke softly to him. He began to relax and was momentarily quiet.

The silence was soon broken by a piercing scream – the baby’s reaction to having his foreskin pinched and crushed as the doctor attached the clamp to his penis. The shriek intensified when the doctor inserted an instrument between the foreskin and the glans (head)…tearing the two structures apart…The baby started shaking his head back and forth – the only part of his body free to move – as the doctor used another clamp to crush the foreskin lengthwise, which he then cut…The baby began to gasp and choke, breathless from his shrill continuous screams…I found my own sobs difficult to contain. How much longer could this go on?

During the next stage of the surgery, the doctor crushed the foreskin against the circumcision instrument and then, finally, amputated it. The baby was limp, exhausted and spent.
I had not been prepared, nothing could have prepared me, for this experience. To see a part of this baby’s penis being cut off – without an anesthetic – was devastating. But even more shocking was the doctor’s comments, barely audible several octaves below the piercing screams of the baby, “There is no medical reason for doing this.” I couldn’t believe my ears, my knees became weak, and I felt sick to my stomach…”  Observe a circumcision before you decide.

Circumcisions are done with limited to no pain relief.

The procedure can be extremely traumatic. 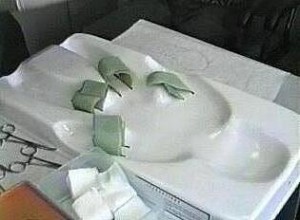 Historically, it’s been difficult to gather information on male infant circumcision. It’s also been difficult to find any benefits pertaining to the natural male anatomy. All of this is changing. Since the birth of the information age, Americans are learning that, outside of Israel, America has the highest neonatal circumcision rate of 32.5% (2009 Reference CDC) in the world.  They are one of the few remaining societies that practices secular infant circumcision. England, the country that helped give North America the modern form of the ritual, has stopped performing secular infant circumcision since the 1950’s. Even Canada’s circumcision rate, as of 2005, was at 9.2% and dropping 0.5% per year – Australia’s rates are comparable. In the past, many American women weren’t even given a choice – they were told by their doctor’s that their baby would be circumcised – only to find out later that it wasn’t medically necessary.

Today, there is more information available then ever before. Please feel free to browse the links on this website.